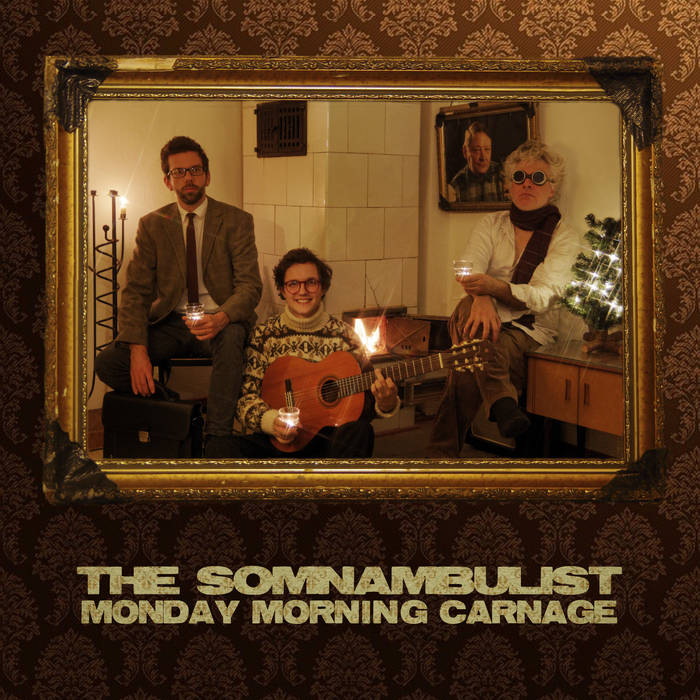 THE SOMNAMBULIST are back – with a new single release on December 22nd, accompanied by an important message: Have yourself a wacky little Christmas!
To guide you safely through this year’s holiday season, they recorded two super special songs which are close to the heart of the band’s distinctive way of songwriting. But please, make yourself comfortable first: Gather around your softly crackling fireplace, have a seat on a fake polar bear rug and take a sip of that delicious Feuerzangenbowle. You know Feuerzangenbowle, don’t you? That German alcoholic punch that knocks your head off? Just like these two brand-new live recordings will.
The Berlin-based band, which has undergone several line-up changes during the last years, has revisited one of their all-time classics: "Monday Morning Carnage". Since its original version appeared on the 2012 album “Sophia Verloren”, it has become a favorite in THE SOMNAMBULIST’s live set, while Albertine Sarges, guest singer of that song, has taken flight with her Italo-Pop band Itaca. Marco Bianciardi (voice & guitar), Thomas Kolarczyk (double bass) and Leon Griese (drums & percussion) vacuum-cleaned the dusty parlor, bypassed the piano of Chris Abrahams (The Necks, Laughing Clowns and Benders) and the violin of Rafael Bord (Les Hurlements d’Léo, The Somnambulist) of the album version – and went “back to basic”: one guitar, one acoustic bass and that soft, lovely tickledee-tickledee of the hi-hat.
The other song is even older – 326 years, to be exact: “Cold Song” is the now common name of the aria "What power art thou, who from below", that stems from Henry Purcell’s baroque semi-opera “King Arthur” from 1691. If you never heard of it – it’s quite popular these days: New York avantgarde counter-tenor Klaus Nomi saved this beautiful gem for generations to come – even though mainstream crooner Sting tried his best to drown it in a frozen pond of winter wonderland kitsch. THE SOMNAMBULIST come to Purcell’s rescue: Their stripped-down, plain version is certainly closer to the original than Nomi and Sting, for it turns Purcell’s mannerism neither into hyper-artificiality nor into sob stuff, but into a touching modern expression of human longing.
But don’t start to cry now. Don’t water down your yummy Feuerzangenbowle with your salty tears. It’s Christmas, right? Yes, the season might suck, but that doesn’t mean that you can’t sit down and come up with an exit plan for this world gone worse. No ideas yet? You better strip off your ski suit and continue your winter listening session with the actual album of the band that came out this year: Quantum Porn. Right now, the band is preparing a deluxe double vinyl edition of that soon-to-be classic, so if you want to support them in this venture, become a supporter of their Patreon project: www.patreon.com/thesomnambulist
What?! You haven’t even listened to Quantum Porn yet? You definitely need to catch up on this one: It’s a heavy tool – and sounds best when you lie naked on a fake polar bear rug.

Artwork and photography by Arne Fleischmann and Newlight-foto.